It is estimated that as many as 1 in 4 dogs may have some form of behavioural problem. For those dogs in rescue this figure is likely to be higher. Many rescue dogs and puppies come with some psychological problems which stem from a lack of socialisation and habituation in the critical early weeks and months of life. Socialisation is the process by which a puppy learns how to recognise and interact with those species with which it co-habits (be they canine, human, feline etc.). This allows the puppy to recognise and respond to the intentions of others and to recognise whether or not another individual is threatening. Habituation is the process by which the puppy becomes accustomed to non-living stimuli in the environment, and learns to ignore those which do not pose a threat. Puppies raised in an environment where they are not exposed to the everyday experiences which they will encounter in normal life are not equipped to cope with them.It can be a tough road for these dogs and some may never be ‘right’ after missing out on so much essential early experience. However, there’s always hope.

A really important thing to remember is the importance of rules and routine. Sometimes where progress with these dogs goes awry is that their loving new owners are understandably desperate to shower these poor souls in affection and while this is, of course, important if there are no rules or limits these little dogs can still feel lost (or turn into spoilt little horrors!).

It is vitally important when bringing a new rescue home to establish and/or continue a nice  consistent routine and decide on some rules and limits for what the dog is allowed to do. For the  more extreme cases walks might be a bit overwhelming but for those who can cope with it ample  aerobic exercise in the fresh air, somewhere quiet initially, is a wonderful tonic and vital for  mental and physical stimulation. For those not already used to a collar and lead then this should  be gently introduced ASAP so that the dog can go on ‘walks’ to the garden. Toilet training may be  tricky if this has never been learnt so lots of positive reinforcement training will be useful. It  probably goes without saying that punishment for mistakes has no place here.

Crate training can be very useful so that the new arrival has a safe, comfortable den to call their own where they can retreat when they are feeling anxious. An old blanket over the top helps to make it feel extra welcoming and safe. I think there is very much a place for an aDAPtil diffuser plugged in in all the rooms where the dog is spending much time, especially close to her crate.

Basic training classes will be a good idea in the long run but at the very beginning will almost certainly be overwhelming and detrimental. Start with building confidence with the new owners through lots of positive reward-based training and then quietly introduce more people one by one, at home where he or she feels safe, but waiting for the dog to come to them and not forcing any interaction. Once confidence starts to build a good training class (with small groups and an understanding instructor!) will be useful.

Play will come as confidence builds – especially if another dog in the home enjoys play with the owners. Letting the new arrival watch them play should pique their interest and with time this will usually click into place. Play is both a indicator of a happy, contented dog and a way of producing one. It should never be forced though as the frequent introduction of lots of new toys can be overwhelming, and overzealous attempts to encourage play can be very frightening! Try different styles of toy – cuddly toys, squeaky ones, balls, chewy rubber; but only introduce a new one every few days.

These traumatised little dogs need quite, firm, confident leadership from their owners – they will be looking for someone who makes them feel safe and secure and will reward you with the most wonderful love and affection. 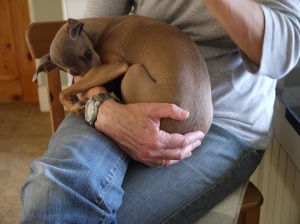